Global climate change is a serious problem that requires the involvement of a scientifically literate public to solve. But what does the public understand about this complex issue and its relationship to the combustion of fossil fuels?

We have been investigating this question by studying how incoming freshmen at Michigan State University make sense of standard representations of the global carbon cycle. The incoming freshmen represent the college-bound public who have high school degrees.  We asked them about the carbon cycle because the carbon cycle explains the cause of global climate change – the addition of CO2 into the atmosphere from the combustion of fossil fuels – and provides a framework for evaluating options for its mitigation.

The carbon cycle can be thought of as pools and fluxes. The pools are reservoirs of carbon, such as vegetation and soil (which contain carbon in the form of organic substances) and the atmosphere (which contains carbon in the form of carbon dioxide and methane). Fluxes are processes that move carbon between pools such as photosynthesis and combustion.  Below is a widely used representation of the carbon pools and fluxes that interact with the atmosphere.

Preliminary analysis of the written responses of 99 incoming freshmen indicated that very few have this knowledge or skills.  More specifically we showed these students a picture of the levels of carbon dioxide in the atmosphere over the last 60 years and had students pick what they thought would happen to future levels if the world suddenly and miraculously cut its use of fossil fuels in half.  Students were offered the choice of:

Choice B is correct, but only 29% of the students chose this answer. Only 14% of the students chose B and explained their choice reasonably indicating that cutting fuel use in half would mean that there is still a flux of carbon from the pool of fossil fuels to the atmosphere that would contribute to increasing CO2 levels. Most of the students (65%) predicted that CO2 levels would fall immediately or after some time. Most of their explanations fell into one of four categories. Below we list sample student responses for each category.

This indicates that very few students leave high school with a bathtub type model of the atmosphere as a pool of carbon whose size is determined by the relative rates of multiple fluxes in and out. This type of reasoning is essential for evaluating predictions and claims about possible solutions to the problem of global climate change.  Perhaps most disturbingly, these findings indicate that most people do not see the urgency of the problem, because they believe that any reduction in the use of fossil fuels will lead to a reduction in CO2 levels rather than merely slowing the increase.

In response to these findings, we are taking a deeper look at how people with different backgrounds and training think about the carbon cycle and we are altering instructional materials to deal directly with this issue.  The Poker Chip Model of the Carbon Cycle is one set of instructional materials that has been reshaped based on this research to better support students’ development of the skills described here. 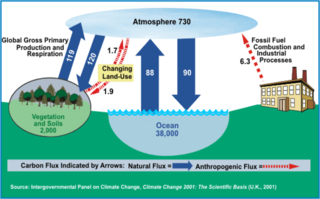