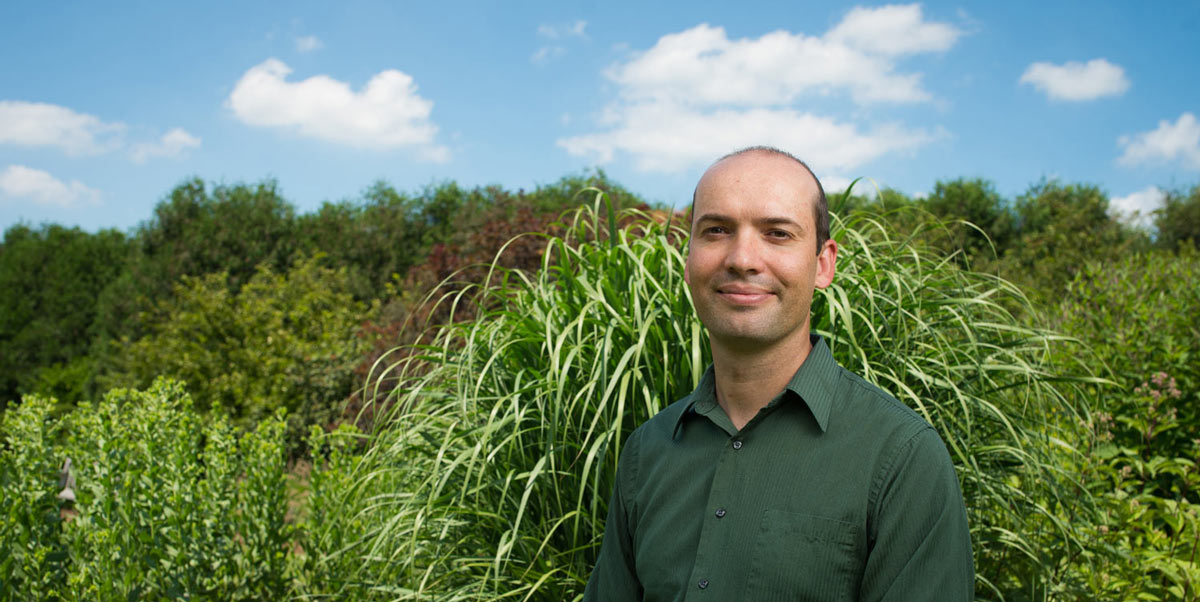 Switchgrass is attractive as a potential bioenergy crop because it can grow for years without having to be replanted. Requiring less fertilizer than typical annual crops like corn, switchgrass can keep more nitrogen, phosphorus and carbon in the soil and out of our air and waterways. But, unlike corn, breeding of switchgrass for optimal traits is still in its early stages.

Now, in a collaboration with the U.S Department of Energy (DOE) Joint Genome Institute (JGI), a DOE Office of Science User Facility, and the University of Texas at Austin, Great Lakes Bioenergy Research Center researchers at Michigan State University have identified specific parts of genetic code within the plant that could contribute to larger switchgrass harvests – while reducing potential crop weaknesses.

David Lowry, assistant professor of plant biology at MSU, and Thomas Juenger, professor of integrative biology at UT Austin led a team that identified genes that boost switchgrass growth across a wide range of climates – and that these plants can be bred to include these genetic markers. In so doing, the researchers found that some adaptive traits in switchgrass can often be improved without hurting plant health in other ways. The results of this study were published this week in the Proceedings of the National Academy of Science.

Thomas Juenger, professor of integrative biology at UT Austin, says the network of switchgrass researchers in the agricultural community were a key factor in completing the study.

Like many domesticated plants, switchgrass has multiple cultivars adapted to different geographic regions. Northern upland switchgrass typically lives on ridgelines and in prairie areas in states such as South Dakota, Michigan, and Wisconsin. As is the case with many things from the north, this breed doesn’t mind the cold and can survive harsh winters.

However, northern switchgrass just doesn’t grow as large or as quickly as the southern lowland ecotype that thrives in wet, marshy areas from Missouri and Kansas down to Texas. The southern cultivar also tends to be more pest-resistant and can better withstand extreme conditions such as drought and flooding. The southern ecotype, on the other hand, doesn’t tolerate cold winters, often dying off when the weather turns too chilly.

To try and get the best of both worlds, Lowry, Juenger, and their partners devised an experiment across the central United States – from Texas to South Dakota – to determine what loci cause differences between the varieties adapted to cold northern areas versus hot southern areas.

"We’re interested in how often loci that improve performance in some sites (say in the south) come at a cost or tradeoff for performance at other locations (say in the north). The 10 sites were mainly chosen to involve people we’d met or had interacted with in the switchgrass community over the past few years - and cover the latitudinal distribution of the species," says Juenger. "We’ve really tried to build the field plantings as a community resource."

Researchers chose 10 sites across 17 degrees of latitude to fully capture the variation in traits of a single switchgrass hybrid. David Lowry

First, they created a crossbreed of the two varieties, then planted hundreds of the same switchgrass hybrid in 10 locations covering the entire geographical region. Comparing growth of the hybrids to the parent cultivars at each site, the researchers isolated the genetic cause of beneficial outcomes using an approach called quantitative trait locus (QTL) mapping.

Because the southern variety is generally a larger grass, researchers have often thought its loci would be solely responsible for increasing the size of hybrids. Surprisingly, the experiment revealed that northern switchgrass gene play a role in increased biomass as well.

“This means if we can combine those genomes together through hybridization, we can actually get a much higher-yielding plant,” says Lowry.

Genetic adaptation often comes with tradeoffs. For example, traits that confer winter hardiness in the north might divert resources from growth. Similarly, the prevalence of growth genes in southern-adapted plants might reduce their cold tolerance.

In this study, advantageous characteristics for growth were expressed in one region of the country without others being diminished. “That tells us a little bit about how adaptation works and how it could provide a benefit for agriculture,” says Lowry. “If we can select on these loci, we can get a benefit without much of cost.”

And because they designed the study to cover such a broad geographical area, the group could isolate these win/win genetic scenarios.

“Usually there are only two field sites involved in these types of experiments, but we had 10.” Lowry says, “So we had a much better idea that there were these loci that have much lower costs associated with them.”

“We’re getting new insights into how plants adjust in different environments,” he adds. “Understanding how switchgrass adapts to the northern U.S. versus the southern U.S. will allow us to use that knowledge to improve it as a bioenergy crop.”