A six-year Great Lakes Bioenergy Research Center (GLBRC) study on the viability of different bioenergy feedstocks recently demonstrated that perennial cropping systems such as switchgrass, giant miscanthus, poplar, native grasses, and prairie can yield as much biomass as corn stover.

The study is significant for beginning to address one of the biofuel industry’s biggest questions: can environmentally beneficial crops produce enough biomass to make their conversion to ethanol efficient and economical?

Since 2008, University of Wisconsin–Madison research scientists Gregg Sanford and Gary Oates, and their colleagues at Michigan State University, have cultivated more than 80 acres of crops with the potential to become feedstocks for so-called “second-generation” biofuels – i.e., biofuels derived from non-food crops or the non-food portion of plants – at UW’s Arlington Field Station and MSU’s Kellogg Biological Station.

“We understand annual systems really well, but little research has been done on the yield of perennial cropping systems as they get established and begin to produce, or after farmland has been converted to a perennial system,” says Oates.

To find out basic information about how well certain crops produce biomass, Sanford and Oates tested the crops across two criteria: diversity of species, and whether a crop grows perennially (continuously year-after-year) or annually (needing to be replanted each year).

Corn, when grain is included, proved to be most productive over the first six-year period of the study at the Wisconsin site, but giant miscanthus, switchgrass, poplar, and native grasses were not far behind. While the soil is not as fertile at the MSU site, there, miscanthus actually produced the same amount of biomass as corn (grain included) in the experiment, with poplar and switchgrass within range. 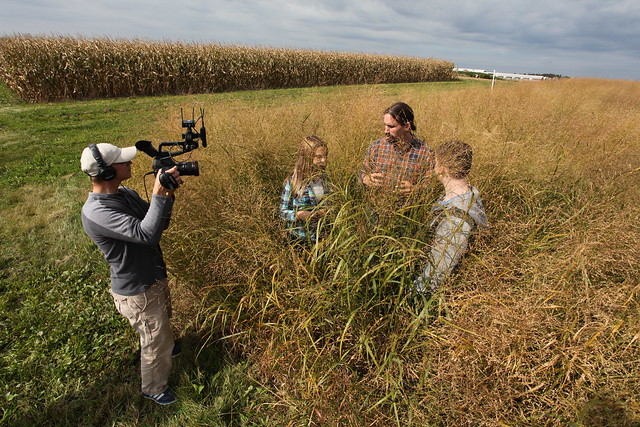 “All of this means that, at large scales and on various soils, these crops are competitive with corn, the current dominant feedstock for ethanol,” Sanford says.

Data from the project also suggests improvements will come fast for these perennial crops.

“Corn has a huge head start from a historical standpoint – it’s been bred by farmers and seed companies in the U.S. for more than a century,” Oates adds, “but advances in our understanding of chemistry, genetics, and biology means these other crops can catch up quickly.”

If there are limitations to the success of the trial thus far, it’s that it takes time for some perennial crops to produce enough biomass for harvest.

“In our case, the ramp-up of native prairie grass and switchgrass took almost two years,” says Sanford. “That’s a long time for farmers to wait for income.”

“One bad year can also have a big impact,” Sanford adds, noting the failure of the miscanthus crop at Arlington in the first year of the study. “If not for an unusually cold winter, it would have been more competitive with corn in Wisconsin,” he continues. “Looking forward, putting financial protections in place that are similar to those for commodity producers could help insure farmers when this happens.”

Now in the midst of the study’s eighth year, Sanford says the study will continue for the foreseeable future.

“We know that perennial systems can prevent negative impacts such as soil erosion and nitrate leaching and that they also provide habitat for native species that provide beneficial ecosystem services,” Sanford says, “but there are still a lot of questions we want to answer about soil processes and properties, questions that take many years to answer.”

The GLBRC is one of three Department of Energy Bioenergy Research Centers created to make transformational breakthroughs and build the foundation of new cellulosic biofuels technology. For more information on the GLBRC, visit www.glbrc.org or visit us on twitter @glbioenergy.