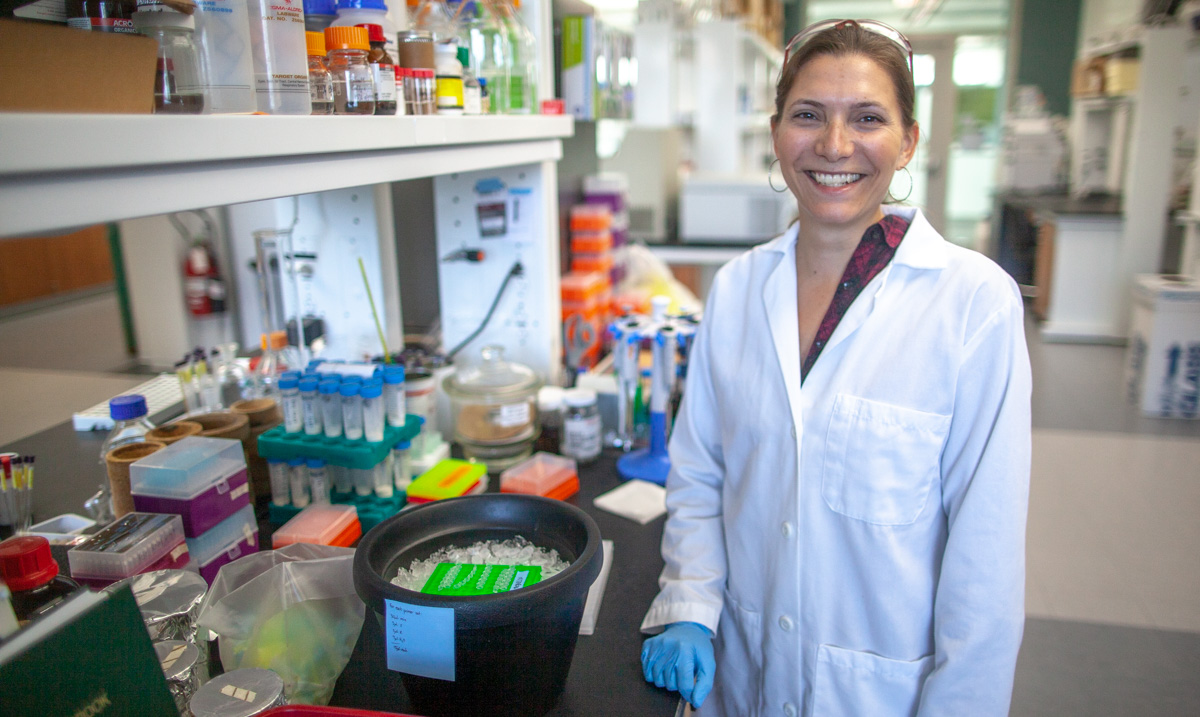 Rebecca Smith has loved plants for a long time. In fact, her interest stems from an AP biology class in high school.

“Something about the enormous variation and complexity in the plant kingdom sparked my interest,” says the assistant scientist at the Wisconsin Energy Institute and Great Lakes Bioenergy Research Center (GLBRC), “and I knew I wanted to study plants as a career.”

During her undergraduate at the University of Manitoba, Smith took a course called ‘Medicinal and Hallucinogenic Plants’ which, she says, served as her introduction to the fascinating world of plant secondary metabolism.

“I was most intrigued by the energy plants dedicate to complex biochemical pathways in order to make a plethora of natural products,” she says. “I was interested in how the plants were using these products, rather than in how humans make use of them.”

The course helped Smith zero-in on plant biochemistry and cell biology, interests which led her to a PhD at the University of British Columbia, and later to Professor John Ralph’s Biochemistry Lab at UW–Madison.

Lignin: A Tough Nut to Crack

Now, Smith studies lignin, a part of the plant cell wall which helps give plants their strength and accounts for about a quarter of plant biomass. Lignin must be broken down in order to make a plant’s sugars accessible to microbes that can turn them into fuel. However, the challenge of doing this economically has made lignin an expensive obstacle to the viability of plant-based biofuels and bioproducts as renewable fossil fuel alternatives.

Since the beginning of GLBRC, members of the Ralph Lab have been working on how to make lignin more digestible. Recently, they developed a technology called Zip-LigninTM. Plants with zip-lignin are engineered such that their lignin contains chemically – but not structurally – weaker bonds, called ester bonds. Plants with ester bonds remain strong and sturdy while growing, but break apart more readily under chemical pretreatments, allowing for more efficient processing of the harvested plant biomass. This modification can save time, energy, and money in the context of a biofuel pipeline.

In the lab, Smith’s objectives are to identify the enzymes responsible for making ester bonds, and then engineer plants to express them, leading to the optimal cell wall for biofuel production. This can be achieved both by modifying genes which are already present in fuel crops and by inserting genes discovered in other species.

According to Smith, Ralph’s group initially thought that manipulating plants to incorporate ester bonds was their own original idea, “but it turns out that Mother Nature has been doing it for a long time,” she says.

To learn more about which species of plants produce ester bonds naturally and how they are formed in the wild, members of the Ralph Lab have been screening the entire plant kingdom.

When enzymes responsible for producing the desirable bonds have been identified, Smith experiments with increasing expression of these bonds in the fuel crops under study.

Recently, she had the success of identifying some genes that encoded enzymes which the team thought would have the bond-manufacturing function they were looking for. “After positive in vitro tests,” she explains, “I put them into a model plant and did the analysis to determine if they are in fact making more of those ester linkages—and they are! It was very exciting.”

I love that feeling of coming up with a new idea or a new strategy. A new way to achieve our goals that we haven't previously thought of.

John Ralph has high praise for Smith’s ingenuity when it comes to engineering plants for use as biofuels. “Dr. Smith has developed a frankly amazing program in [plant biochemistry]” he says, highlighting Smith’s innovative work on introducing chemically cleavable bonds into lignin.

Others in the field have also taken notice of Smith’s success. This spring, Smith received the Robert Rabson Award from the American Society of Plant Biologists, which honors early career professionals for their excellent contributions to bioenergy research. She is also the recipient of the Great Lakes Bioenergy Research Center’s Women in Science Award.

For Smith, however, satisfaction comes not from recognition but from the fulfillment of the research process.

“I love that feeling of coming up with a new idea or a new strategy. A new way to achieve our goals that we haven’t previously thought of,” she says. “There’s that excitement of planning out an experiment and bringing results to fruition.”