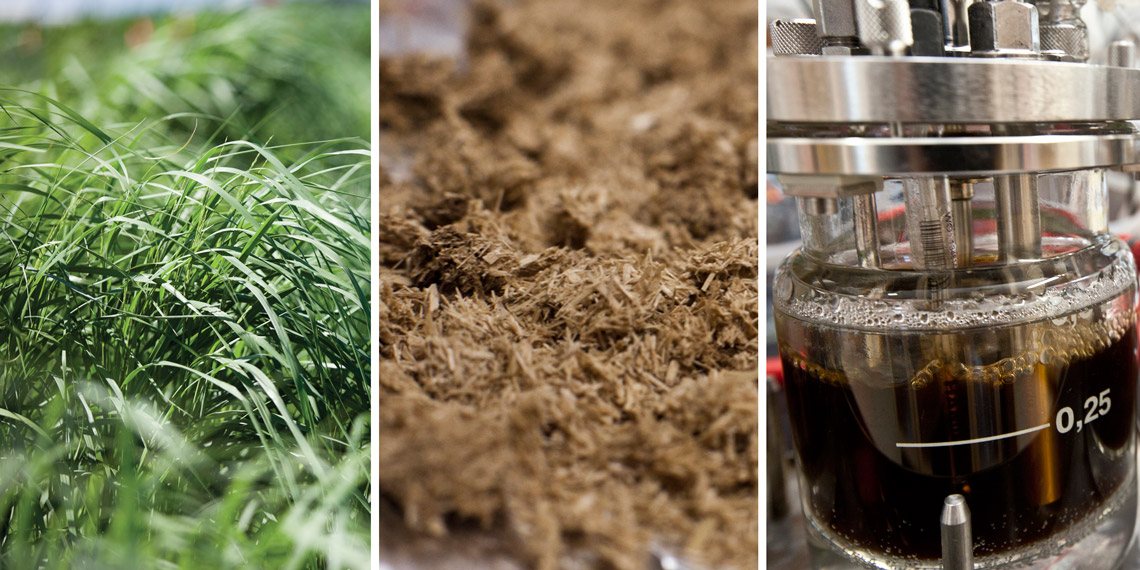 Less input, more output. That’s the achievement of a new biomass pretreatment method that could help improve the economics of cellulosic biofuels, the second-generation biofuels made from grasses, wood, and the inedible parts of plants.

Called “Extractive Ammonia” (EA), the liquid ammonia-based pretreatment helps address two of the cellulosic biofuels pipeline’s biggest bottlenecks: the high cost of preparing biomass for conversion to biofuel, and the problem of lignin, a hard-to-degrade component of the plant cell wall.

“To make cellulosic biofuels commercially competitive and viable,” Sousa says, “we have to be able to produce cheap sugars.”

Pretreatments, such as the ammonia-based AFEX™ method, serve to process biomass in a substance that helps unlock the plant’s sugars. This unlocking then provides enzymes the access to sugar they need to catalyze the conversion of biomass into biofuel.

Sousa began his research by taking a close look at how ammonia interacts with the plant cell wall, and how it makes the cell wall more easily digestible for enzymes. Then, by experimenting with the conditions in which he applied ammonia to the plant cell wall – moisture level, temperature, and pressure – Sousa developed a novel pre-treatment that could convert the cell wall’s cellulose sugar from one type of cellulose (cellulose I) to another type (cellulose III) that is up to five times easier for enzymes to break down.

The reduction in enzyme loading, however, is not the only advance Sousa and his team achieved with the new process. At the same time that EA converts biomass cellulose to a more digestible version of itself, it also separates out up to 45 percent of the lignin while largely keeping its carbohydrates intact. Since lignin inhibits the work of cellulose-degrading enzymes, extracting it further reduces the need for enzymes. Preserving the extracted lignin’s functionalities also means that EA lignin could potentially be a valuable bio-refinery co-product, or a future source of lignin-derived fuels and chemicals.

“We designed our pretreatment technology to do both at the same time,” Sousa says, “And this has allowed us to reduce our enzyme loading by about 60 percent of what was initially used for AFEX™ pretreatment to achieve the same result.”

Sousa and colleagues also relied on other Department of Energy-funded Bioenergy Research Centers (BRC) in developing EA. The Joint BioEnergy Institute (JBEI) and the BioEnergy Science Center (BESC) both contributed exploratory biofuels technologies – ionic liquids from JBEI, dilute acid from BESC – that enabled Sousa to perform a solid comparative study between those technologies and EA.

“With EA, we basically have a different paradigm,” Sousa says. “We changed the way we’re doing the pretreatment to be able to reduce the enzyme loading to levels that AFEX™ is not able to do, but now we have to keep evolving this technology to be able to fit the industry.”

According to Sousa, future research on EA will work to reduce the method’s use of ammonia and pressure. Both reductions could make EA more economically competitive and environmentally friendly, and could make significant headway in improving the viability of the cellulosic biofuels pipeline.

GLBRC is one of three Department of Energy Bioenergy Research Centers created to make transformational breakthroughs and build the foundation of new cellulosic biofuels technology. For more information on GLBRC, visit www.glbrc.org or visit us on twitter @glbioenergy.