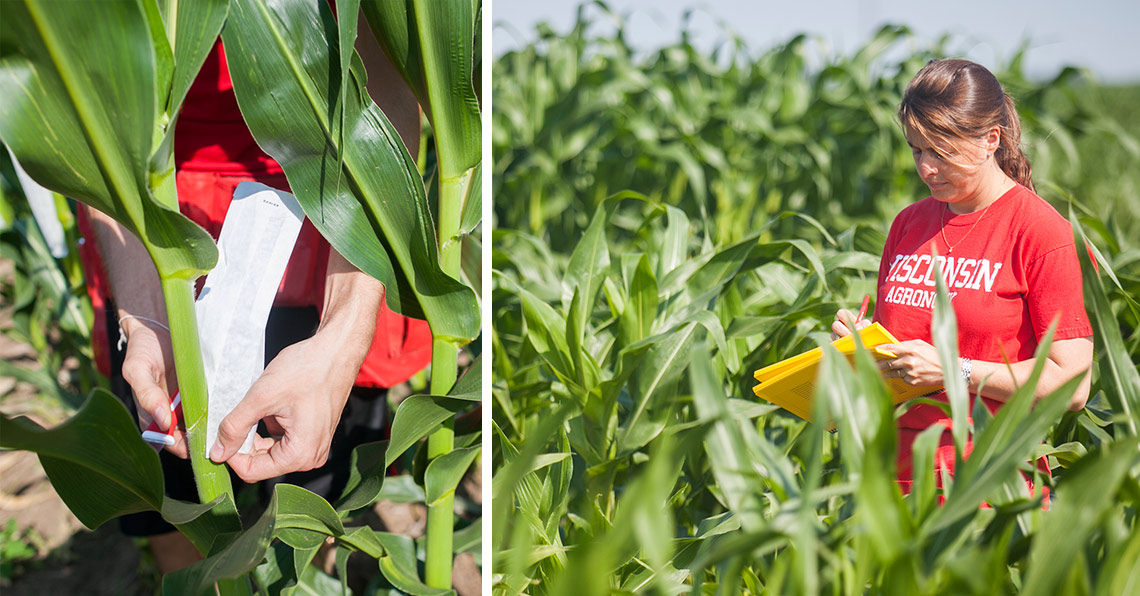 (left) University of Wisconsin–Madison graduate student Nick Haase puts a bag on an ear shoot of corn. Corn ear shoots must be covered before the silks emerge to protect them from being pollinated by the wrong plant. (right) Natalia de Leon, Assistant Professor of Agronomy at UW-Madison and project lead at the Great Lakes Bioenergy Research Center, takes notes on experimental corn plots at the West Madison Agricultural Research Station. Natalia looks for differences in height, total biomass, color, disease, pollination time and other factors. Photos by Matthew Wisniewski.
Matthew Wisniewski
Krista Eastman

Traveling across the American Midwest, where corn is both a major commodity and a prominent feature of the rural landscape, it’s easy to take the corn plant for granted.

Spend five minutes on the receiving end of plant breeder and geneticist Natalia de Leon’s enthusiasm for corn, however, and you’ll find yourself taking a closer look, absorbed in the complexities of a genetically diverse and high-yielding plant.

De Leon, an associate professor of agronomy at the University of Wisconsin-Madison and a researcher at the Great Lakes Bioenergy Research Center (GLBRC), can talk corn at high speeds, rapidly covering everything from its 7,000-year history of domestication to what it’s like working seven days a week from July to mid-August covered entirely in corn pollen.

“Corn is fascinating for many reasons,” she says. “It provides an excellent genetic model for basic research, it has a really interesting genome and a lot of genetic variability, and it’s a really important commodity, which means there are many interesting ways for corn research to travel out and into the world.”

The daughter of two plant breeders, de Leon’s passion for plants came to her early. As a child she used to accompany her father into the cornfields each summer, an experience that helped kindle what would become a lifelong love of biology and, as de Leon puts it, a habit of “asking a lot of questions.”

“All summer long, my dad was in the field pollinating and measuring plants,” de Leon says. “I used to go with him and hold the notebook, taking notes for him as he was rating different things in the field. I always enjoyed it.”

Though born in Uruguay, de Leon moved a lot as she was growing up, following the research careers of both her parents. Coincidentally, the family’s first move brought them to Madison, Wisconsin, where her parents completed their PhDs while living in UW-Madison’s Eagle Heights neighborhood. De Leon was only three at the time.

After leaving UW-Madison, the family moved to Argentina and then Brazil, before returning to Argentina where de Leon earned her B.S. in Agronomy from the Argentinean Catholic University. After graduating in 1997, de Leon returned to Madison as a U.S. Dairy Forage Center intern. From there, she enrolled as a graduate student in UW-Madison’s plant breeding and plant genetics program, completing her Ph.D. in 2002.

After a year of post-doctoral research at Michigan State University and two years working for a seed company in Michigan, de Leon once again returned to Madison. In 2006, she accepted a faculty position in UW-Madison’s Department of Agronomy and shortly thereafter began conducting GLBRC-funded research.

“When you drive along the highway, you see corn and it all looks the same, but actually corn has a lot of genetic variability,” de Leon explains. “You’ve got different plant heights, kernel colors, cob colors, different compositions, different qualities of grain, and different sizes of cob, and the list goes on.”

De Leon and her team of researchers measure that variability – the length of the corn’s ear, the color of its kernels, or the height of the plant – and then associate it with DNA and RNA marker variations in order to map out which regions of the genome are associated with or influencing specific physical traits.

“If we can come to understand which genetic components are tied to different traits, we can breed plants that exhibit those desired traits,” de Leon says. “In the case of biofuels, we’re looking to produce bigger, less recalcitrant plants that will result in more digestible biomass.”

A better understanding of corn, a genetic model with a long and rich history of study, can also yield information about lesser-known cousin crops such as switchgrass, an adaptable, high-producing plant that is also a potentially valuable biofuel feedstock.

While the winter months find de Leon and her team indoors, using technologies such as high throughput screening to analyze large data sets, the group’s first laboratory is the outdoors, where most of the grueling work of acquiring phenotypic data is carried out in the summer. In the field – regardless of heat, wind, or rain – the group measures plants, monitors their experiments, and collects the seed they’ll need for next year’s experiments.

“It’s very, very labor intensive,” de Leon says. “We manually pollinate every plant in ten acres of corn. And we measure another 30 to 40 acres of corn manually and with technology.”

And yet de Leon is among the first to admit to loving the fieldwork component of her research, adding that each year she and her staff recruit a “very special crowd” of undergraduate students – one that is enthusiastic about the research and the prospect of demanding outdoor work.

“When you’re in a mature cornfield the only thing you can see is corn all around you,” de Leon laughs, elaborating on what she sees as the joys of the field. “It’s on all sides. The pollen is all over you. It’s total immersion research.”

The importance of corn as a commodity crop is also an important aspect of de Leon’s work, as any information gained has the potential to be useful to a number of different markets. The almost 90 million acres of corn already in cultivation in the United States creates an enormous amount of biomass. Plant improvement, de Leon says, could thus be a viable means of mitigating the environmental impact of both our agricultural and fuel production systems. More and more, de Leon says, researchers have to be focused on sustainability and impact.

“Biofuels won’t be the only solution,” she says, “but we’re going to need every tool that makes sense environmentally. We’re going to need specific solutions to specific problems and right now we really need to bring about everything we think might help us solve our energy problems.”

While de Leon believes there is still a tremendous amount of work to be done to mitigate climate change, she is encouraged by research initiatives such as the GLBRC.

“I would have never interacted with the folks I interact with today if it wasn’t for GLBRC,” de Leon says. “It has enabled discussions and projects that would not have otherwise happened. And I have learned a tremendous amount. I really think there’s a lot to be said for interdisciplinary and collaborative research centers like this one.”

The GLBRC is one of three Department of Energy Bioenergy Research Centers created to make transformational breakthroughs and build the foundation of new cellulosic biofuels technology. For more information on the GLBRC, visit www.glbrc.org.