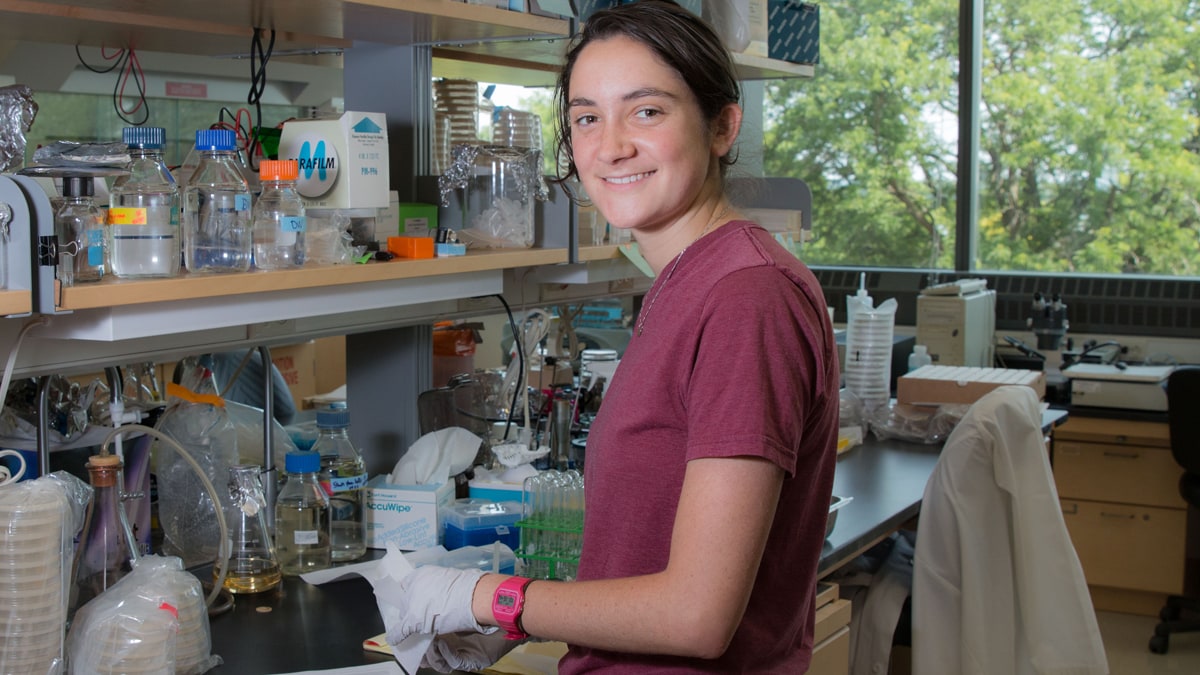 In honor of her significant accomplishments and contributions to the GLBRC, the 2021 recipient of the Jennifer L. Reed Bioenergy Science Award is Julia Martien, GLBRC scientist and graduate student in the Department of Bacteriology at the University of Wisconsin–Madison.
Hannah Harms

Julia Martien calls her study organism, Zymomonas mobilis, a “domesticated bacterium,” citing its long history of human use. Archaeologists have found evidence of its use to make fermented beverages dating back to around 500 A.D., making Martien and her colleagues part of a long tradition of Zymomonas enthusiasts.

As part of the Great Lakes Bioenergy Research Center, Martien, a fifth-year PhD student in microbiology at UW–Madison, is now harnessing the bacteria’s ethanol-producing capabilities to synthesize renewable alternatives to chemicals and fuels currently derived from fossil fuels. Her research focuses on how environmental stressors may shift the metabolism of Z. mobilis to produce higher levels of valuable bioproducts. “Just like we learn a lot about ourselves when we’re put in stressful situations, we can learn a lot about bacteria when we put them in stressful conditions,” she says.

Specifically, Martien stresses her Zymomonas cultures out by exposing the bacteria to oxygen and by limiting their nitrogen supply. These methods have helped illuminate crucial biosynthesis enzymes that could be targeted in future metabolomic engineering projects.

Julia Martien, GLBRC scientist and graduate student in the Department of Bacteriology at UW–Madison Chelsea Mamott

In honor of her work and its impact, Martien has been named the 2021 winner of the Jennifer L. Reed Bioenergy Science Award. This award recognizes an early career woman who has made significant contributions to the GLBRC research portfolio.

"Julia is genuinely passionate about science and her dedication have translated into meaningful contributions to the GLBRC and the broader scientific community. She has also demonstrated a unique ability towards teaching and community outreach, and she is both a Wisconsin Idea STEM Fellow and a WARF Volunteer,” says Daniel Amador-Noguez, UW–Madison associate professor of bacteriology and Martien’s advisor. “Furthermore, she cares deeply about environmental sustainability, which has been a strong motivational driver of her research and professional activities. This unique combination of aptitudes and interests makes Julia an outstanding researcher of remarkable potential and I look forward to her continued success.”

Martien’s first introduction to biology as an undergraduate was in a class entitled “Life in the Universe,” which inspired her to enroll in a subsequent course taught by Amador-Noguez to learn more about microbes. “I was fascinated by the diversity of lifestyles in bacteria,” she says. “As humans, we have to get our energy from the food that we eat, but bacteria are much more liberated in their options.”

As Martien has progressed in her academic career, her affinity for bacteria has continued to grow. “Each type of bacteria inhabits their own ecological niche where they contribute something different to their environment,” she says. “So it’s easy to imagine them all as having some kind of personality.”

When it comes to Z. mobilis, “I see it as a little kid at a birthday party who licks all the cupcakes but doesn't eat them. It extracts only a small amount of energy from the sugar and incorporates very little of the carbon into actual biomass,” Martien says. “Instead, it converts all the sugars around it into ethanol, which is toxic to other organisms—a ‘lick the cupcakes’ strategy for competition.”

Z. mobilis can tolerate very high concentrations of sugars, she notes, but if the sugar runs out, it cannot survive long before starving. It also has a relatively small genome—about 2,000 genes, compared with 4,000 in E. coli and about 5,000 in brewer's yeast—which makes her think of it as a bit immature and lacking in complexity. “So it reminds me of a spoiled little kid that's been fed unlimited cupcakes for more than 1,000 years,” she says.

Martien’s colleagues say that her passion for microbiology is infectious, which makes her the perfect mentor for those just starting out in the field. They also praise the quality of her work and her ability to pull apart the details of a complex biological system. “It’s been just a joy to work with Julia over the years and see her enthusiasm for science, her creativity, and her passion for teaching others,” says Brian Pfleger, a chemical and biological engineering professor at UW–Madison.

Being part of the GLBRC has helped her build supportive professional connections and scientific collaborations. “I feel like the faculty here really care about my future success,” Martien says. “Everybody is really willing to introduce me to their colleagues and brag about my accomplishments for me.”

Martien says the welcoming nature of the GLBRC has been fundamental to her achievements thus far.

“It can be really intimidating to work in science,” she says. “I try to combat imposter syndrome by listening to the positive encouragement I’m getting from the people around me. And of course, receiving awards like this one helps too. I really appreciate the GLBRC for lifting up the people who are part of this community and helping us to have the confidence moving forward.”