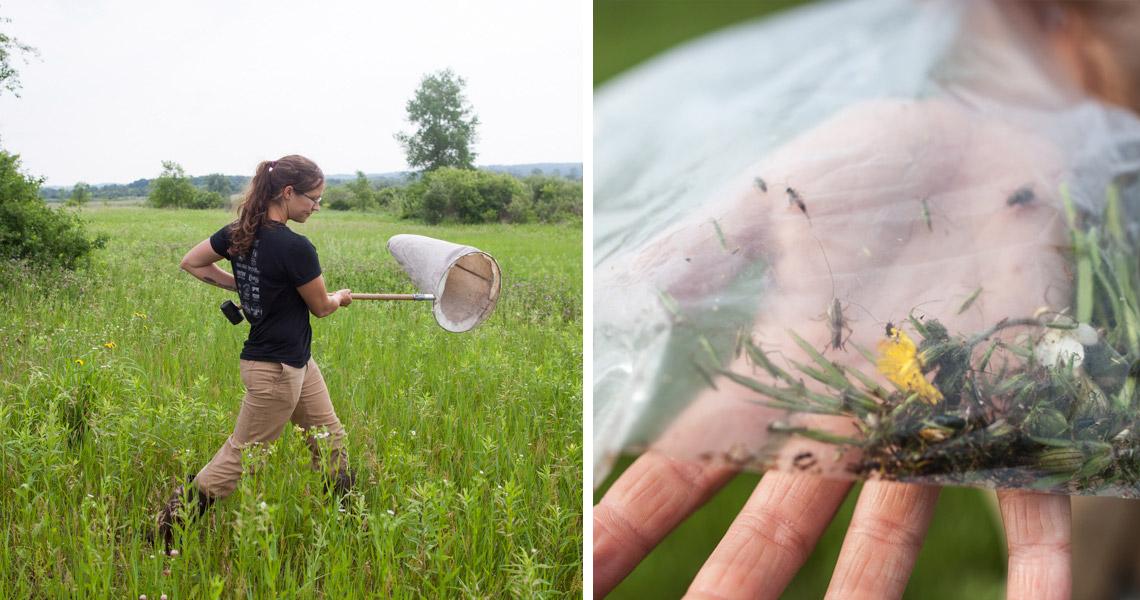 n a lightly overcast morning in early June, Great Lakes Bioenergy Research Center (GLBRC) and UW-Madison entomologist Claudio Gratton’s team of researchers and technicians file into a passenger van and head out for another day of gathering insects from the twenty native grassland sites that make up the team’s outdoor summer laboratory.

Once in the field, the group will trap and collect the bees, wasps, beetles, ants, lacewings, and stinkbugs whose brief but busy lives may influence how we create a sustainable future for bioenergy. Funded by the GLBRC and the U.S. Department of Agriculture, the Gratton Lab is conducting two studies designed to understand how perennial native grasslands – and the predatory insects or pollinators thriving within them – respond to large-scale harvests that mimic biomass harvesting.

“Learning how to manage crops,” Gratton says, “requires an understanding of insect communities. If we can understand how insects influence biomass crops as well as how different cropping systems influence insects, we may be able to determine not only which management practices will contribute to high yields, but which ones increase biodiversity and strengthen natural communities at the same time.”

By gathering data on insects found within harvested sites as well as within un-harvested control sites, Gratton and his team will study if and how harvesting grasslands affects insect abundance and diversity, pollination, pest suppression and other “ecosystem services”, the positive and tangible benefits an ecosystem can provide people.

“We already know that perennial grasslands are biologically diverse, drought resistant, good for carbon sequestration, and that they grow well on marginal, non-food crop lands,” Brian Spiesman, post-doctoral researcher and pollinator expert, explains. “What we don’t know is how an annual harvest might affect or alter the biodiversity of these grasslands or their insect communities.”

Addressing that question requires several seasons of exacting fieldwork, with each field season necessitating two or more months of planning and pre-coordination, many hands willing to perform several summer months of collections, as well as at least six more months dedicated to parsing through the data and preparing results for publication.

Throughout the early spring, Gratton, Spiesman, and post-doctoral researcher Tania Kim focus on recruiting and hiring technicians and undergraduate workers, renewing permits for use of study sites owned by the State of Wisconsin’s Department of Natural Resources and U.S. Fish and Wildlife, as well as building or purchasing the sweep nets, pan traps, pitfall traps, nest traps, bee bowls, and hand held vacuums used to capture different specimens in the field.

By the end of April or the beginning of May, data collection begins. Kim, who leads the fieldwork for the GLBRC-funded predator study, often visits ten of the twenty sites in one day. Staying at each site for only brief periods of time, she and a team of two to four people coordinate quick and efficient collections of predatory insects such as lady beetles, ants, lacewings, and stinkbugs trapped using a variety of mechanisms.

To measure diversity at a site, Kim’s group uses pitfall traps placed into the ground, sweep nets to capture insects living in vegetation, and sticky cards or fly strips, a brightly colored eight by ten adhesive surface used to collect insects from the air. To measure the rate of a site’s insect predation, the team places insect prey, such as frozen eggs or frozen or dead larvae, into the field, returning a couple of days later to count and record the number of eggs or larvae remaining.

It’s a routine that research specialist Kiley Friedrich, who assists Kim in the field, finds anything but dull.

“You see every country road in the state,” Friedrich says. “And you spend so much time with your team you really get to know each other. You get the satisfaction of solving problems in the field and on the spot. And you get to watch as a piece of land transitions all the way from spring to late summer. It’s beautiful.”

Spiesman, whose USDA-funded study focuses on pollinators, uses similar methods to collect data on native bee and wasp diversity and abundance. In addition, he also performs timed observations for the purpose of tracking visitation rates, observing a flower from one to two meters away for a period of twelve minutes while waiting silently and without movement for a pollinator to visit.

When a pollinator does arrive (if a pollinator arrives), Spiesman and his field technician, Ian McCririe, use a modified handheld vacuum to suck up the bee for later identification. Though patience is said to be its own reward, in this case Spiesman is after something more specific. Pollination data like this permits him to assess a site’s pollinator diversity as well as to map out the visitation rate of each bee species to each flower species, information he uses to understand how bees are using available resources and how they are contributing to pollination, a valuable ecosystem service.

“Our biggest challenge is definitely the weather,” Kim says, addressing the idiosyncrasies of the lab’s day-to-day. “Since insect activity is so closely tied to weather, we can’t just survey our sites at any time. Our field schedule can sometimes change every hour. We keep our field clothes and a vehicle ready, and take every opportunity to get out and work.”

And of course fieldwork, even when conducted in Wisconsin’s relatively pleasant summer climate, is not without its irritations. Last summer lab member McCririe won the highly dubious distinction of “Most Ticks,” having removed 60 of them from his person before everyone just stopped counting.

Preliminary results from Gratton’s two studies, though not yet complete, suggest that harvesting native grassland sites to some degree mimics burning, a process which has long played a part in the ecology of native perennial grasses and which is known to revitalize and preserve grasslands.

“One thing we’ve seen so far,” Spiesman says, “is that harvesting a site seems to re-set the competitive hierarchy of the plants, knocking back the abundant, strongly competing plants and allowing the rarer plants to get a foothold for the next season.”

Gratton says that this field season’s data collection, like past and future seasons’, plays a very important role in GLBRC’s examination of the sustainability of biofuel production. Among the first researchers in his field to focus on grassland communities across a large, landscape-wide sample area, Gratton is particularly enthused about these two studies, which are designed to approach the scale at which actual biofuel harvesting would take place.

The much broader implications of a potential increase in grassland-based energy crops in our agricultural landscapes are also very much at the core of Gratton’s work. More grasslands could mean more “beneficial” insects (i.e., increased pollinating, more pest suppression), more birds, and a more diverse landscape that provides a wider range of ecosystem services, including carbon sequestration. Growing grassland bioenergy crops could then be a way of both producing biomass and cultivating the sort of wildlife benefits once an integral part of the Midwest’s native grassland and prairie ecosystems.

“The future of bioenergy will in part be determined by the arthropods that help us and hurt us,” Gratton summarizes. “Insects have an outsized impact on our crops and our world. And studying that impact is an important step in moving toward sustainably managed bioenergy production.”