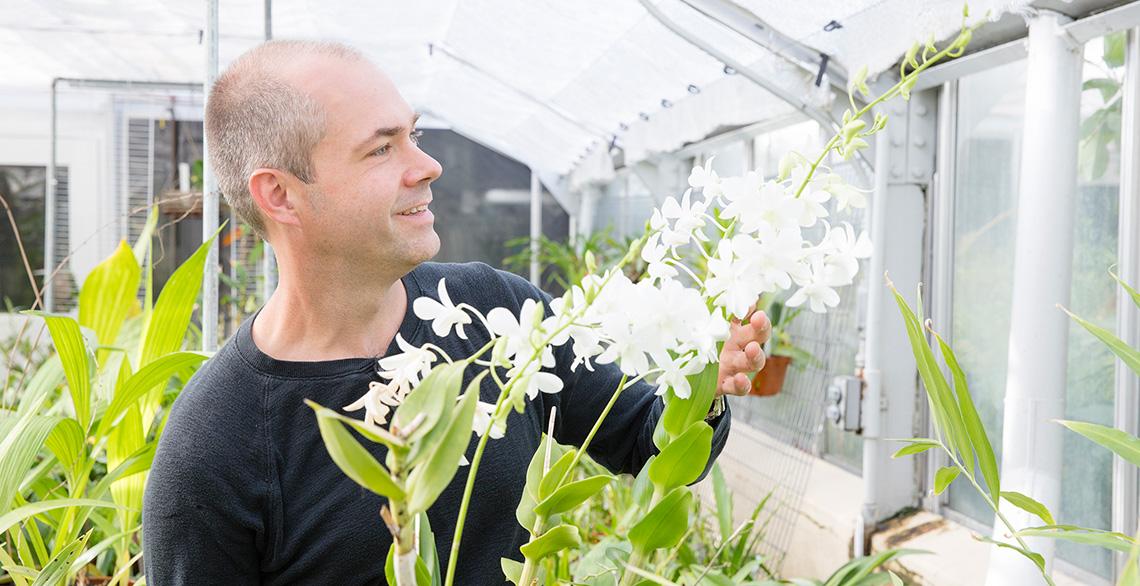 GLBRC research scientist Steve Karlen with an orchid in the Botany Greenhouse on the University of Wisconsin–Madison campus. For a new study published in Science Advances, Karlen sampled over 60 plants from all over the phylogenetic tree, finding that many plants naturally or natively create "zip-lignin." The discovery could open the door to breeding plants for increased degradability or engineering them for easier processing.
Krista Eastman

MADISON -- When scientists reported in 2014 that they had successfully engineered a poplar plant “designed for deconstruction,” the finding made international news. The highly degradable poplar, the first of its kind, could substantially reduce the energy use and cost of converting biomass to a number of products, including biofuels, pulp, and paper.

Now, more than two years later, some of those same researchers are reporting a surprising new revelation. As University of Wisconsin–Madison professor of biochemistry John Ralph puts it, “Nature was already doing what we thought we’d laboriously taught her to do.”

To make the hybrid poplar, Ralph, Shawn Mansfield, Curtis Wilkerson, and other Great Lakes Bioenergy Research Center (GLBRC) researchers had incorporated an exotic gene conferring weak bonds into the plant’s lignin, the hard-to-process compound that gives plant cell walls their sturdiness but makes them difficult to process in an industrial setting. The resulting lignin, dubbed Zip-lignin, readily breaks down under simple chemical conditions.

This new GLBRC-led study, published October 14 in Science Advances, shows that those poplar trees and many other plants from all over the phylogenetic tree have actually evolved to naturally produce zip-lignin. In other words, not only can we potentially breed for degradability in plants, but humans may have been doing just that – selecting certain plants for easier processing – for thousands of years.

“We didn’t know the plants were making the native zip because we couldn’t detect it,” says Steve Karlen, a research scientist at UW–Madison and the paper’s lead author. “When we added the new gene we thought we were adding functionality, but we were actually increasing what was already there.”

Even though the team couldn’t at first detect native zip-lignin in poplar trees or in angelica – the Chinese herb from which the group had taken the gene – its absence did raise some questions. Ralph had long suspected that some plant somewhere was naturally creating zip-lignin. And Karlen wondered how angelica, or any plant for that matter, could be making the molecules that confer weak bonds in lignin but not incorporate them.

Using a method that Ralph’s group had developed decades ago, plus a new and highly sensitive mass spectrometer, Karlen sharpened his focus, finding a way to detect low levels of native zip-lignin in poplar trees. With the help of Phillip Harris, a professor of biological sciences at the University of Auckland in New Zealand, Karlen began a full-scale phylogenetic study, seeking to determine what other plants might contain native zip-lignin.

Karlen was soon elbow-deep in greenhouses, gardens, and landscaping beds all over the UW–Madison campus. Examining the more than 60 plant samples brought back to the lab revealed that zip-lignin is found in an exceptionally diverse array of plants – in balsa, in birds of paradise, in all the grasses he sampled, and in about half of the hardwoods, to name just a few.

With collaborator Laura Bartley, an associate professor of microbiology and plant biology at the University of Oklahoma, Karlen also found zip-lignin in rice. Since an entirely different gene was responsible for making this lignin, the team determined that plants have independently evolved to make zip-lignin, essentially developing a common feature though entirely different means.

Although Karlen and his collaborators don’t yet know what the evolutionary advantage of native zip-lignin might be for plants, its widespread presence broadens the scope of their research and holds out the possibility of increasing, either through engineering or breeding, the degradability of a surprisingly vast array of plants.

GLBRC is one of three Department of Energy Bioenergy Research Centers created to conduct transformational research and build the foundation of new cellulosic biofuels technology. For more information on GLBRC, visit www.glbrc.orgor visit us on twitter @glbioenergy.