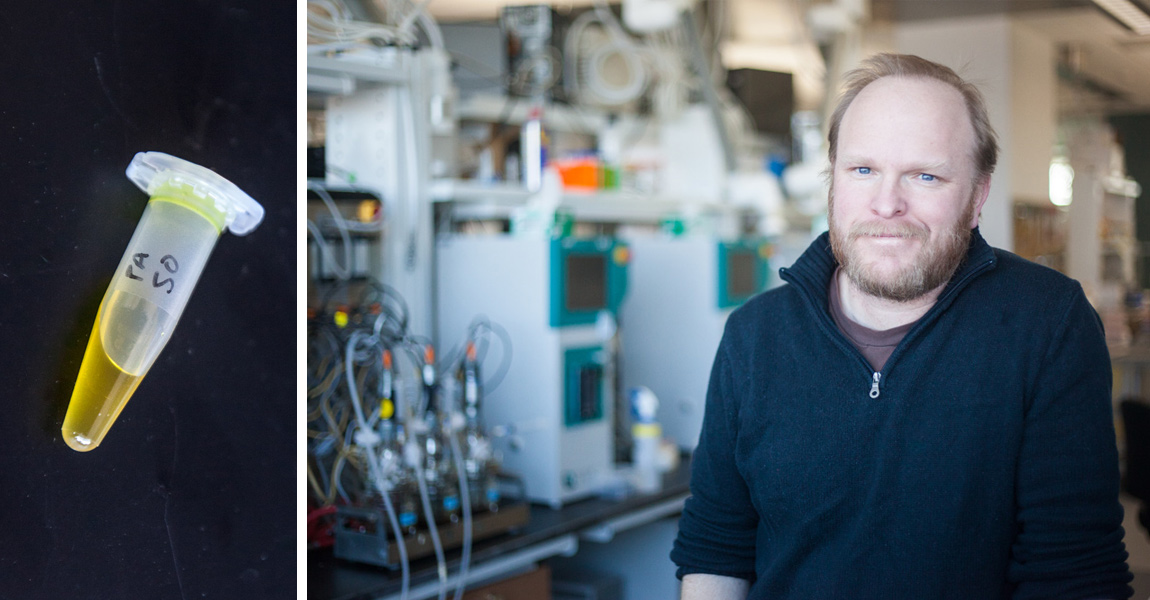 Scientists at the Great Lakes Bioenergy Research Center (GLBRC) reported today the discovery of a chemical compound called poacic acid that could eventually be used as a fungicide in both sustainable and conventional farming.

“Poacic acid may have the potential to replace copper sulfate, which is used as a fungicide in organic agriculture but accumulates to toxic levels in soil,” says Jeff Piotrowski, GLBRC assistant scientist and lead author on the paper. “But it could also be used in combination with synthetic fungicides, to lower dosage or reduce the chances of developing resistance.”

Piotrowski, along with collaborators from the University of Tokyo, discovered poacic acid through research focused on the small molecule inhibitors present when cellulosic biomass – the non-edible portion of plants – is broken down for biofuel production.

The inhibitors, which curb growth of biofuel-producing microbes, are considered obstacles in the process of converting biomass to fuel. But Piotrowski and colleagues suspected that the inhibitors’ strong anti-microbial properties meant they could also be valuable outside the context of biofuels.

To explore that possibility further, Piotrowski obtained a set of relatively little known inhibitory compounds called diferulates that GLBRC Plants Leader John Ralph and scientist Fachuang Lu had synthesized about a decade before, and began screening them for bioactivity against yeast.

As reported today in the journal Proceedings of the National Academy of Sciences, one of those compounds (poacic acid) caused considerable cell death in yeast.

“We found that poacic acid compromises the cell wall of yeast by binding to it and bursting it open,” Piotrowski says.

Piotrowski and Mehdi Kabbage, assistant professor of plant pathology at UW­–Madison, then tested poacic acid against some common fungal pathogens, finding that a single application succeeded in substantially reducing pathogen growth compared to control applications. Studies revealed that poacic acid was also effective against oomycetes, fungus-like microorganisms responsible for a host of plant diseases, including the one that caused Irish potato famine.

Having secured a grant from the Wisconsin Alumni Research Foundation (WARF) to scale-up production of poacic acid, Piotrowski and GLBRC collaborators Fachuang Lu and Fengxia Yue are now working on producing a kilogram of the compound by late April so that they can test it in a controlled agricultural setting this May or June.

If the testing goes well, poacic acid may ultimately provide a natural fungicide option in a time when such options are not abundant, fungicide resistance is on the rise, and warming temperatures are increasingly causing fungal pathogens to spread northward.

“Biofuels research has produced a reservoir of compounds like this one that have basically gone overlooked,” adds Piotrowski. “This is the first of these compounds. But there may be many others.”

Both areas stand to benefit, Piotrowski says, from the increased importance of cellulosic biofuels to the economy.

For more information on licensing this innovation, contact licensing@warf.org.